Krouse Travel - All Travel, All the Time!

*Promotion is subject to availability, may not be combinable with certain fares or other amenity offers, is capacity controlled and may be withdrawn at any time. Other restrictions apply.

READY TO PLAN YOUR SHORE EXCURSIONS?

This centuries old capital guards the slender waterway between the Mediterranean and the Black Sea, and is the doorway between the East and West. Visitors can explore remnants of Byzantine Constantinople in the Sultanahmet district, where you will have the chance to see ancient splendors, such as the Haghia Sophia, the Blue Mosque and Topkapi Palace. At night the city boast a lively nightclub scene and excellent Turkish dining options that may include cultural entertainment and dancing. Istanbul also features splendid shopping malls, boutiques, and hand crafted items can be found all over the city.

Istanbul: The 16th Century Masterpieces of Sinan the Architect - 7 hours

Kavala is one of Greece's most attractive large port cities. The large community squares, modern buildings and shopping districts on the west side of the city are a pleasant contrast to the traditional homes and small gardens of the eastern side. Visitors will find charming alleyways and picturesque views of the harbor on the more traditional side of Kavala. There is also an archaeological museum containing ancient finds from Greece's past. Villages adjacent to Kavala are filled with treasures such as Early Christian Basilicas, a Roman Forum, the acropolis and a theater. Performances of ancient dramas are held in the renovated theater every summer.

Thessaloniki is Greece’s second largest city, busiest seaport after Piraeus, major cultural center in northern Greece, and capital of Macedonia. Prehistoric remains in the city’s vicinity show the area was settled as far back as 1000 B.C. Thessaloniki is considered more cosmopolitan than Athens. In 1997, the European Community honored the city with title of “Cultural Capital of Europe.” Although many older buildings were destroyed in a 1917 fire and during bombing attacks in World War II, the city still has historical landmarks ranging from the 15th century Venetian Tower to the Arch of Galerius. There are also magnificent churches. The main hub centers around Aristotle Square, a traffic-free area surrounded by arcades with cafes and restaurants. The pedestrian strip along the water’s edge is a popular seafront promenade. Main thoroughfares, Odos Mitropoleos and Odos Tsimski, are lined with luxury shops and boutiques. On Aristotle Street is the picturesque Central Market. Paradise Baths, a Turkish bathhouse dating from 1444, is still in use today.

Volos is a commercial and industrial city; it is Greece’s third-largest port. The location in the gulf of the same name and near scenic Mount Pelion ensures this town an attractive setting. Interesting sites in the surrounding areas include imposing monasteries perched atop craggy mountains and a fine Archaeological Museum. Remains of Mycenaen buildings have been discovered near the river, where a palace stood around 1400 B.C. The main reason visitors come to Volos is to depart on excursions to the monasteries of Meteora.

Visitors come to Kusadasi for beaches and nearby ruins of Ephesus. The major attraction is the archaeological site of ancient Ephesus, considered to be most important in Turkey. The history of this ancient city dates back to 10th century BC; many remarkable structures seen today are result of an excavation and restoration program. Along a white marble road grooved by ancient chariot wheels, the two-story Library of Celsus presents a striking sight. There are temples, houses of noblemen, and community buildings lining ancient streets. Nestled in the mountainside is a 25,000-seat amphitheater, still used for performances during Festival of Culture and Art. Bible buffs may know Ephesus as inspiration for St. Paul’s Epistle to Ephesians and the site of one of the first seven churches of Asia Minor. Treasures are kept in the Seljuk Archaeological Museum. Among the better-known ancient sites near Kusadasi are ancient Miletus and Dydima. Remains include a well-preserved Roman theater at Miletus and Dydima's sacred temple of Apollo.

Kusadasi: The Greco-Roman City of Ephesus & the Wine-making Village of Sirince - 7 hours

This sun-drenched Mediterranean town on the Turkish Riviera is a major resort with a beautiful crescent bay, dramatic cliffs, and jagged mountains. It is an attractive city with shady palm-lined boulevards and a prize-winning marina. In picturesque old quarter, narrow streets and old wooden houses huddle against ancient city walls. Antalya's visitors come see the old town with its picturesque harbor and excellent Archaeological Museum. Its outstanding exhibits provide fascinating glimpses into the life of the region. In the surrounding area are additional attractions such as Aspendos, Perge and Side. Their remains of antiquity are considered among the most impressive sites. Visit Hadrian's Gate and Main Square, which with its landmark clock tower offers views of the bay and distant mountain peaks. Karatay Medrese (Theological College) exemplifies the best of Seljuk stone carving. Ataturk Museum features a collection of interesting memorabilia commemorating the founder of Turkey.

Antalya: The Greco-Roman Heritage of Antalya, Perge & Side - 7 hours

Rhodes is one of Greece’s favored vacation centers and was an important cultural center with a well-known School of Rhetoric attended by such greats as Cicero and Caesar. Rhodes' most famous attractions originated with the Knights of St. John, who occupied parts of the island from 1310 to 1522 and left a medieval town, dominated by the Palace of the Grand Masters and Knights' Hospital, which houses an Archaeological Museum with interesting exhibits of national archaeological finds. Rhodes has inspired many artists. The Old Town offers shopping opportunities and lively nightlife. At Mount Filerimos a church has been built on the site of an ancient temple. A popular excursion is to the charming village of Lindos. Its premier attraction, the ancient acropolis, stands atop sheer cliffs. Walls of a 13th-century Crusader castle enclose the site. Today, the winding path up to the acropolis is lined by stalls, where locals sell lace tablecloths and souvenirs. Mandraki Harbor's entrance is flanked by stone columns topped by figures of a stag and a hind, the town's heraldic animals.

Santorini is everything that has made the Greek islands legendary. The world famous island of Santorini is the southern most island of the Cycladic group in the Aegean Sea, and is located north of Crete. Its population is distributed among thirteen villages and just exceeds nine thousand. The marvelous dry climate and unbroken sunshine create year around conditions which are perfect for observation, photographs and videos under an extraordinary variety of natural lights and colors.

Valletta is the capital of Malta. This remarkable fortified city with its massive bastions followed the most advanced Renaissance ideas in town planning, with streets laid straight on a grid looking over the Grand Harbour. Outside the 'City Gate' is the famous Triton Fountain. 'City Gate' has public buses and vendors selling soft drinks and all sorts of traditional fresh Maltese bread and sweets. Freedom Square shows an extraordinary capital with buildings of fine architecture of different tastes and styles ranging from the Mannerism to Baroque to Rococo to Neoclassicism. Valletta is a fascinating city for wandering around looking at what used to be the Knight's own cathedrals and Auberges. The city's backbone is Republic Street, which runs straight through the city center to Fort St. Elmo. Valletta has several narrow, steep side streets decorated with traditional Maltese pastel colored balconies and a statue on almost every street corner. There are plenty of shops, cafes, and restaurants to choose from.

Sicilia is the favorite island of Gods in traditional poetry. The most powerful and biggest ancient city in Sicilia is Siracusa. Its name may come from the native word "Siraco", which means "marsh", due to the bogs which surrounded the city. Or it may derive from a Phenician etymology signifying the presence of seagulls on its rocky shores. Few cities of the ancient world had the importance Syracuse had in Magna Grecia, the ancient Greek settlements in Italy. The most spectacular monuments in the archeological area surrounded by colorful Mediterranean vegetation are the Greek amphitheatre and the Orecchio di Dionisio (Dionysius' Ear). Besides touring the Archeological Museum that contains beautiful objects, Ortigia Island, the heart of the old Greek city, is worth a visit. Outside the city limits is Eurialo Castle, an incredible structure built to protect the city from the Cathaginians, and Pantalica, the great rocky necropolis in Anapo Valley.

Salerno is situated at the northern end of the Gulf of Salerno. The old town, rising up the slopes of the hill on the site of ancient Salernum, still bears evidence of its medieval period. Salerno's main attraction is a Romanesque cathedral, built in 1085 and remodeled in the late 18th century. Inside is the ornate tomb of Margaret of Anjou and the tomb of Pope Gregory VII, who died here in 1085. In the richly decorated crypt under the alter lie the remains of Evangelist Matthew, brought here from Paestum. A hilltop crowned by the old Lombard Castello offers extensive views. Along the seafront, to the east of the harbor, extends a promenade lined with impressive modern buildings. Visit the Greek temples of Paestum. Other favorite excursions from here are to Pompeii and to the popular resort towns of Amalfi and Ravello. The Museo Diocesano houses a fine collection of medieval carved tablets. Occupying two floors of the San Benedetto Monastery, the main attraction at Museo Provinciale is a handsome bronze head of Apollo fished out of the bay in the 1930s.

Civitavecchia is the port city for Rome. Rome has always been and remains the Eternal City. With its splendid churches, ancient monuments and palaces, spacious parks, tree-lined boulevards, fountains, outdoor cafés and elegant shops, Rome is one of the world’s most attractive cities. Among the most famous monuments is the Colosseum where spectators watched combats between muscled gladiators and ferocious animals. Stop to see the remains of the Forum, once a political and commercial center. Rome’s squares were enhanced with such imposing structures as the Vittorio Emanuele Monument and grandiose fountains like the Fontana di Trevi. Awe at Christendom’s most magnificent church, the Sistine Chapel. The busy square Piazza Venezia is easily recognized by its imposing Vittorio Emanuele II Monument. Take a stroll to Rome's famous Trevi Fountain. Vatican City is the site of lovely St. Peter's Square and St. Peter's Basilica, where for 200 years, Renaissance masters worked on its design and created an unparalleled masterpiece. Visit Vatican Museum.

Painting with Caravaggio for Kids 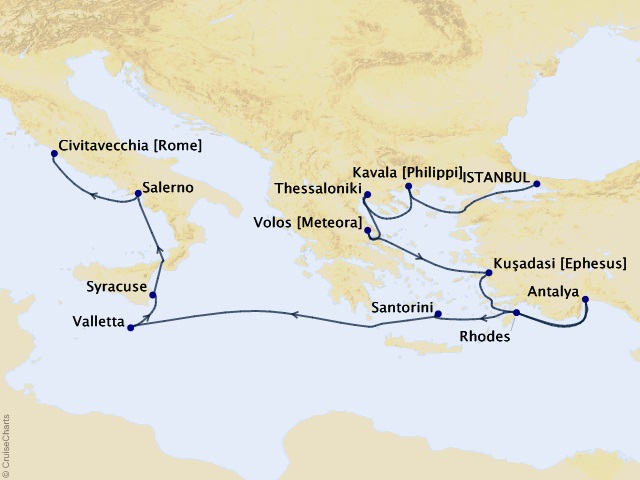 Itinerary subject to change without notice. Please confirm itinerary at time of booking.

Fares are per person, based on double occupancy and reflect all savings. Cruise-related government fees and taxes are included.

Fares are quoted in U.S. Dollars, are per person and are based on double occupancy. Fares do not include pre-paid charges, personal charges or optional facilities and services fees, as those terms are clearly defined in the Guest Ticket/Contract. Also

All prices per person and in USD unless otherwise stated.

Reference this number when contacting our agency so we may better serve you. Also keeping this number handy will allow you to locate this document again quickly.

Information and pricing is subject to change without notice. While we do our very best to ensure that information and pricing appearing in this website is complete and accurate, we cannot be responsible for incomplete and inaccurate representations, which may or may not be under our control. In the event of a pricing error, misrepresentation or omission, we reserve the right to adjust the pricing or make any other corrections.